The inaugural competition was sort of perfectly ‘godfathered’ in December 1985 when Sweden’s skiing legend Ingemar Stenmark celebrated his 80th World Cup win there – over a year after his last victory on the tour. It could not be a better start for the young race than to have such a glorious sports personality opening the long list of winners after celebrating a decade of amazing achievements all around the globe.
With a total of 86 World Cup triumphs in his career over a period of 15 years – from December 1974 to March 1989 - and an impressive collection of gold medals and crystal globes amassed during that time, the champion from Tarnaby remains “the” landmark of the technical specialties in modern ski racing.
The Scandinavian had enjoyed a 1984/85 previous season with plenty of top-5 finishes and four podiums – interestingly enough his great rival Marc Girardelli, a winner on the ‘Gran Risa, afterwards in 1992, won all four of them – yet for the first time since his maiden win in 1974 at Madonna di Campiglio ahead of Paolo de Chiesa, he was not able to celebrate a single victory that long winter dominated by Girardelli with a total of eleven triumphs.
It only took one more year to the ‘Squadra Azzurra’ to achieve another smashing team performance on the ‘Gran Risa’ when Val d’Aosta’s Richard Pramotton lead a clean sweep in the next competition in Alta Badia, winning it ahead of a little-known teenager from Bologna, Alberto Tomba, who turned 20 a few days later, while Oswald Toetsch came in 3rd . Veteran Stenmark, 30 years-old that year, ended a strong 4th!

The same Alberto – already nicknamed ‘La Bomba’ by World Cup founder Serge Lang in one of his stories - definitely anchored the ‘Gran Risa’ in the heart of Italian fans when he dominated his third race in a row a year later – following his surprising back-to-back victories two weeks earlier at Sestriere.
The superstar from Castel dei Britti won the two successive December races in 1990 and 1991 and was 3rd and 2nd in 1992 and 1993 before having another strong comeback in December 1994. That winter, he enjoyed in fact his third consecutive win in three days after his double slalom win at Lech, in Austria! The following year, Alberto was again 3rd in December 1995 in the race captured by Austria’s Hans Knauss which means that he managed to reach at least once the podium each time the race took place in December from 1986 to 1995!

Tomba’s spectacular achievements, the huge crowd attending the competition and the treacherous ‘Gran Risa’ run perfectly prepared by the organisers quickly settled the position of the race within the World Cup calendar, making it soon the most popular giant slalom competition on the circuit at the level of famous downhill races in Switzerland or Austria. No surprise that most of its past winners also excelled on medal events or clinched crystal trophies during their career – people as Marc Girardelli, Michael von Gruenigen, Frederic Covilli, Bode Miller, Kalle Palander, Daniel Albrecht, Ted Ligety or Marcel Hirscher to name the best known among them! 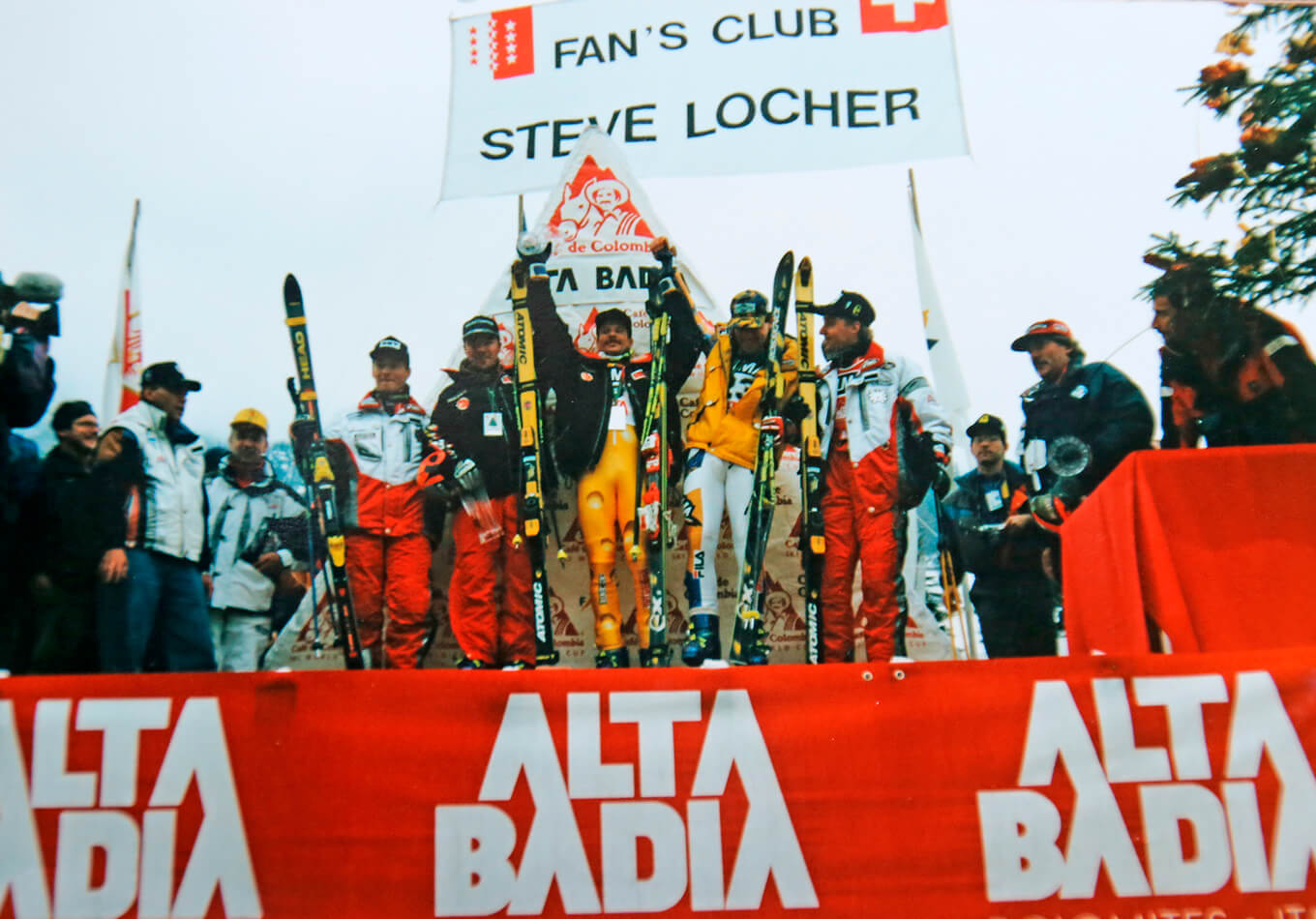 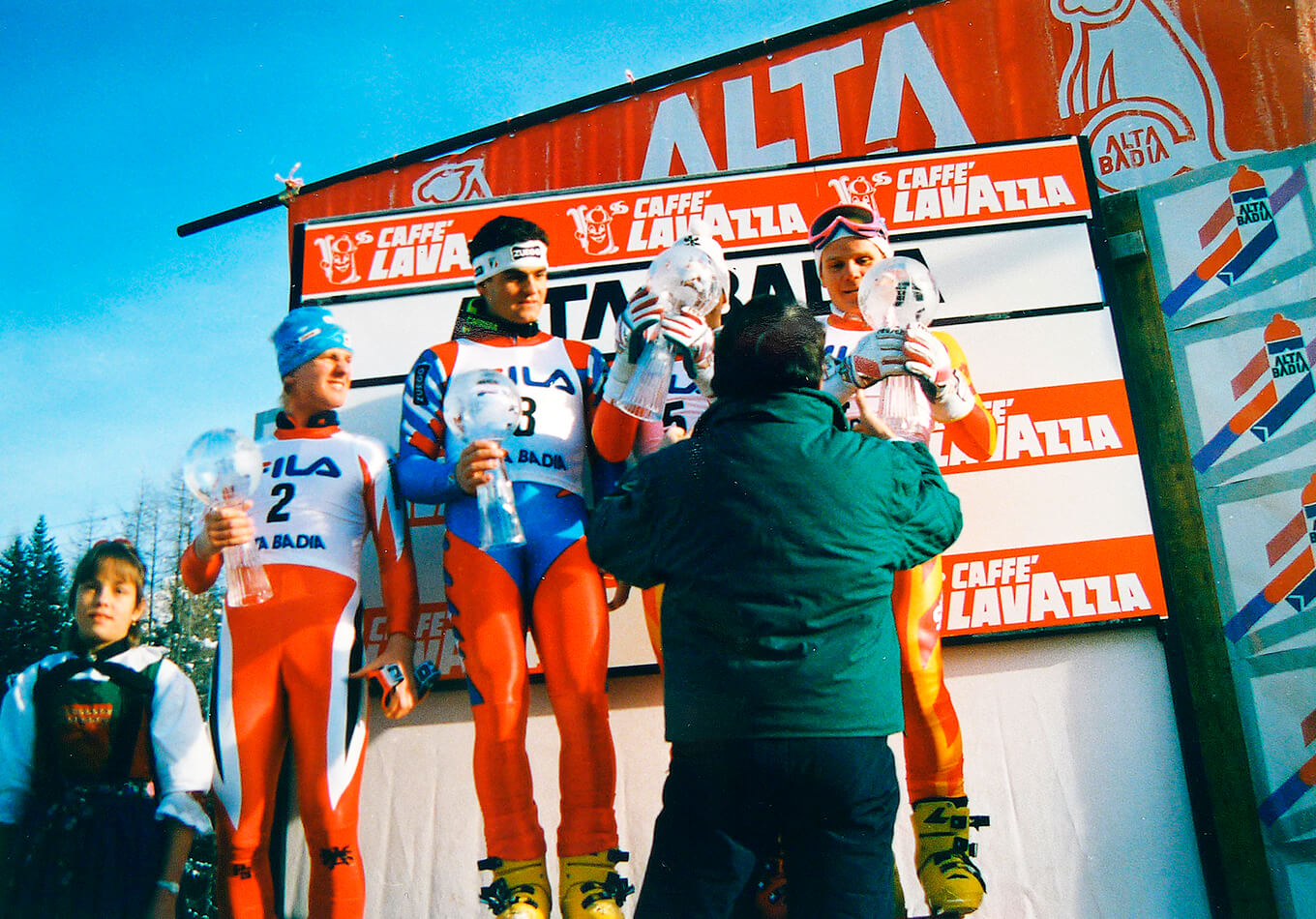 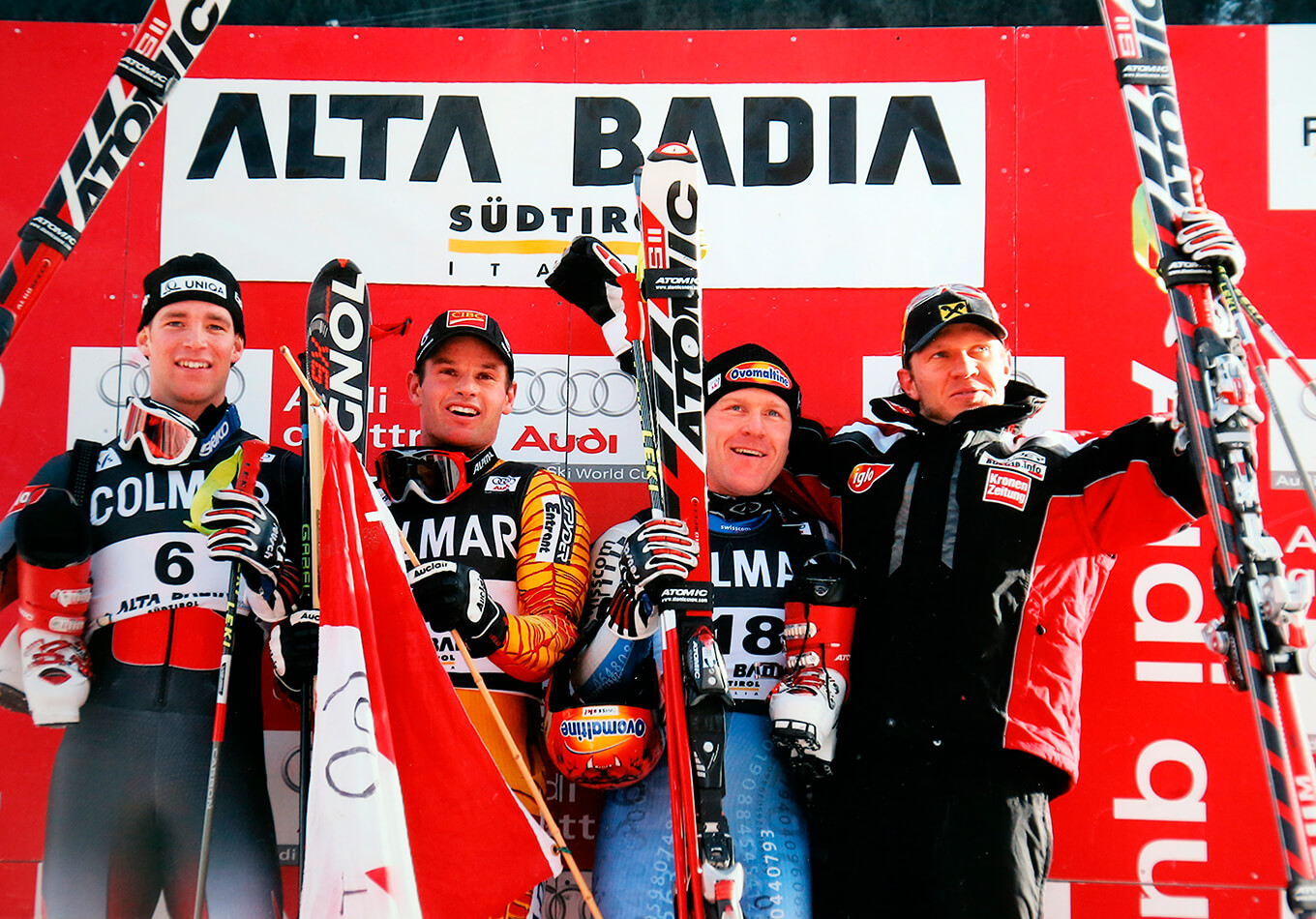 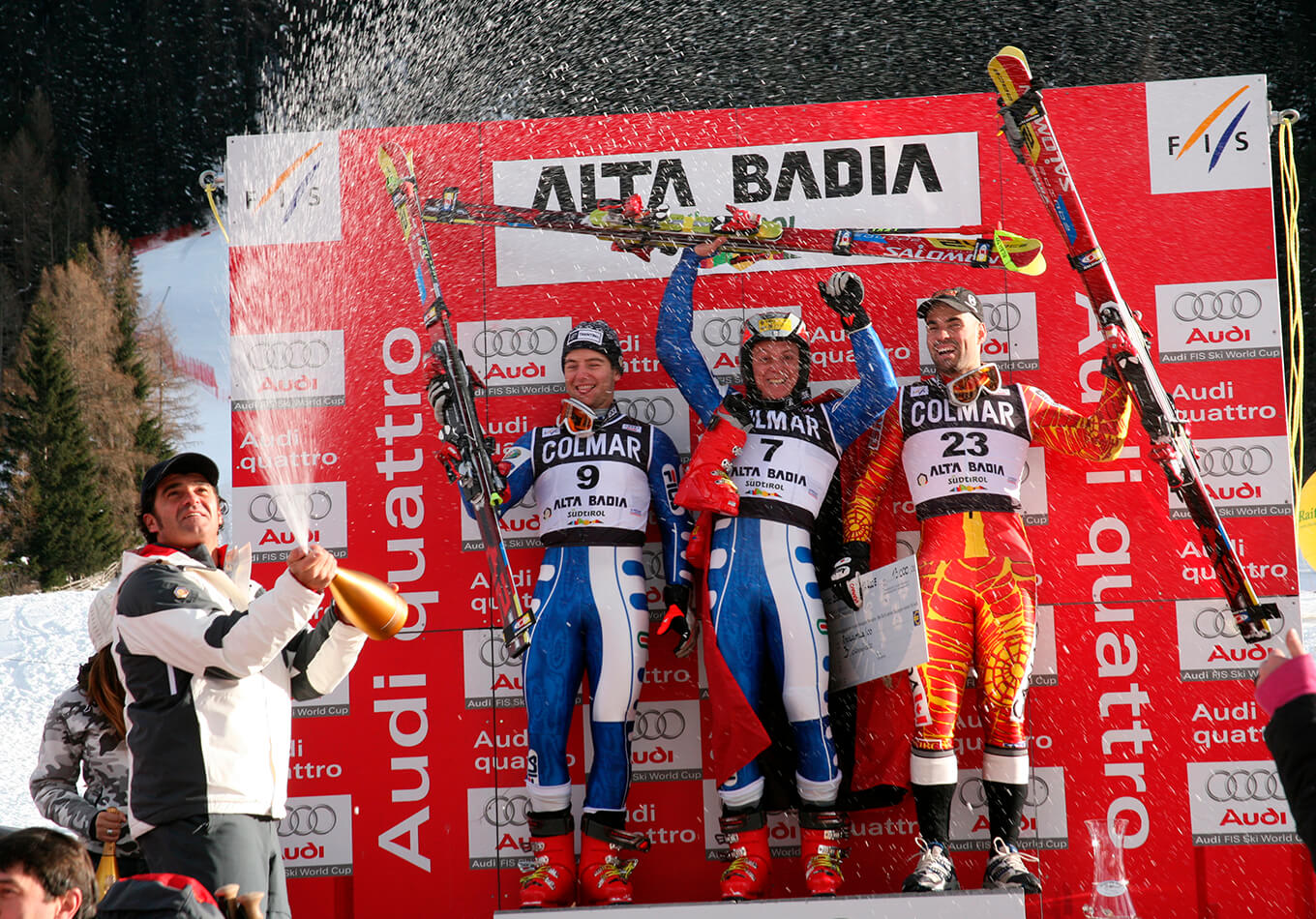 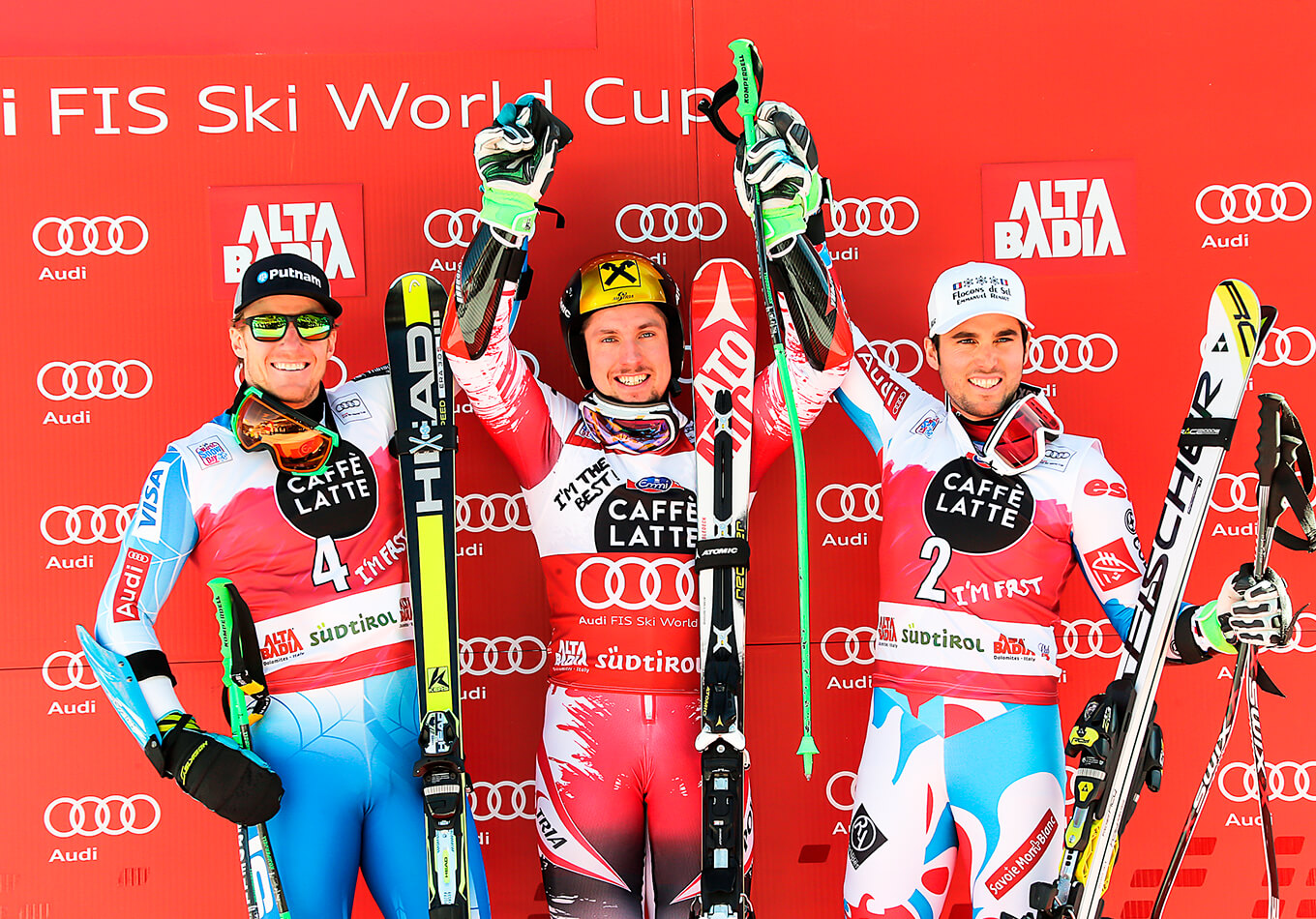 Only a small group of established giant slalom specialists could not achieve their search of ultimate triumph in Alta Badia – stars like Benni Raich and Hermann Maier from Austria, the Norwegian ‘twins’ Kjetil Andre Aamodt and Lasse Kjus and their successor Aksel Lund Svindal, giant slalom gold medal winners Rudi Nierlich and Stefan Eberharter or 2010 Olympic champion Carlo Janka – yet some of them managed to reach the podium once in a while.
In December 1999 Herman Maier missed the victory to France’s Joël Chenal by only 8/100 of a second days after finishing 6th and 3rd in downhill at Val Gardena – and celebrating a total of five victories in giant slalom, downhill and Super-G in previous weeks at Soelden, Lake Louise and Beaver Creek!
The Austrian superstar was also a couple of times 3rd – like in December 2004, a few months prior to clinch his last gold medal in giant slalom at the FIS Ski Worlds at Bormio 2005. With a total of 28 podium finishes, the ‘Herminator’ surely was an impressive giant slalom racer – besides being Olympic champion in that specialty back in 1998!

Some skiers turned out to be truly ‘Gran Risa’ experts as Italian David Simoncelli and Max Blardone who won four times together there and also reached several times the podium in past 15 years… Back in 2009, they even managed to finish 1st and 2nd and created huge enthusiast among their numerous fans standings at the arrival and along the course.

A winner of seven World Cup races in his career, Max also excelled on the most difficult slopes at Adelboden, Kranjska Gora, Beaver Creek, Val d’Isère, Soelden or Lenzerheide amassing a total of 24 top-3 results from 2004 to 2012. It was nice to see him dressed as ‘Superman’ in the finish area of the race a few years ago – the result of a bet with a friend of him.

Davide Simoncelli reached five out of his eight podium finishes in Alta Badia, apparently always very inspired by the thrilling atmosphere surrounding that particular race. He had raced a total of 15 times on the ‘Gran Risa’ – possibly kind of a record in recent years!