The Gran Risa is one of the most popular and suggestive slopes in Italy, immersed in the woods of Alta Badia and surrounded by the Dolomites.
Technically, it is one of the most challenging slopes of the Ski World Cup, with more than one km of downhill track, a gradient of 60 degree, many bends, apparently flat grounds and the so-called “cat humps”. The Gran Risa is the place where the biggest champions have won and where every ski fan wants to try to ski at least one time in his life. It is exciting and thrilling!

The preparation of the slope with injection pipes is essential in world-class competitions such as the giant slalom and the parallel giant slalom, because the snow cover is put under a heavy stress. During this process, high pressure water is injected into the first layer of snow, in order to increase its specific weight. When water comes into contact with air, it turns into a cluster of snow and ice that increases the compactness and hardness of the surface of the slope. For the race it is necessary to achieve a specific weight of about 550 kg/m3 which must be the same for the whole snow cover. The minimum height of the snow cover is 40 cm, in order to hold the poles.
In the past, the slope was wettened with a hydrant, but this solution is not effective and only leads to the creation of a thin layer of very hard snow, similar to ice, which could easily crack under the ski edges.

To ensure that even the last athlete can find the track in the same conditions as the first athlete, and thus has the possibility to win or at least qualify in the top 30 and compete in the second run, preparation with injection pipes is required.
But what does this process involve? Snow is a composition of air and water. Normally it has a specific weight ranging from 250 kg/m3 for soft snow, that means 250 litres of water per cubic meter of snow, to 400 kg/m3 for wet snow. 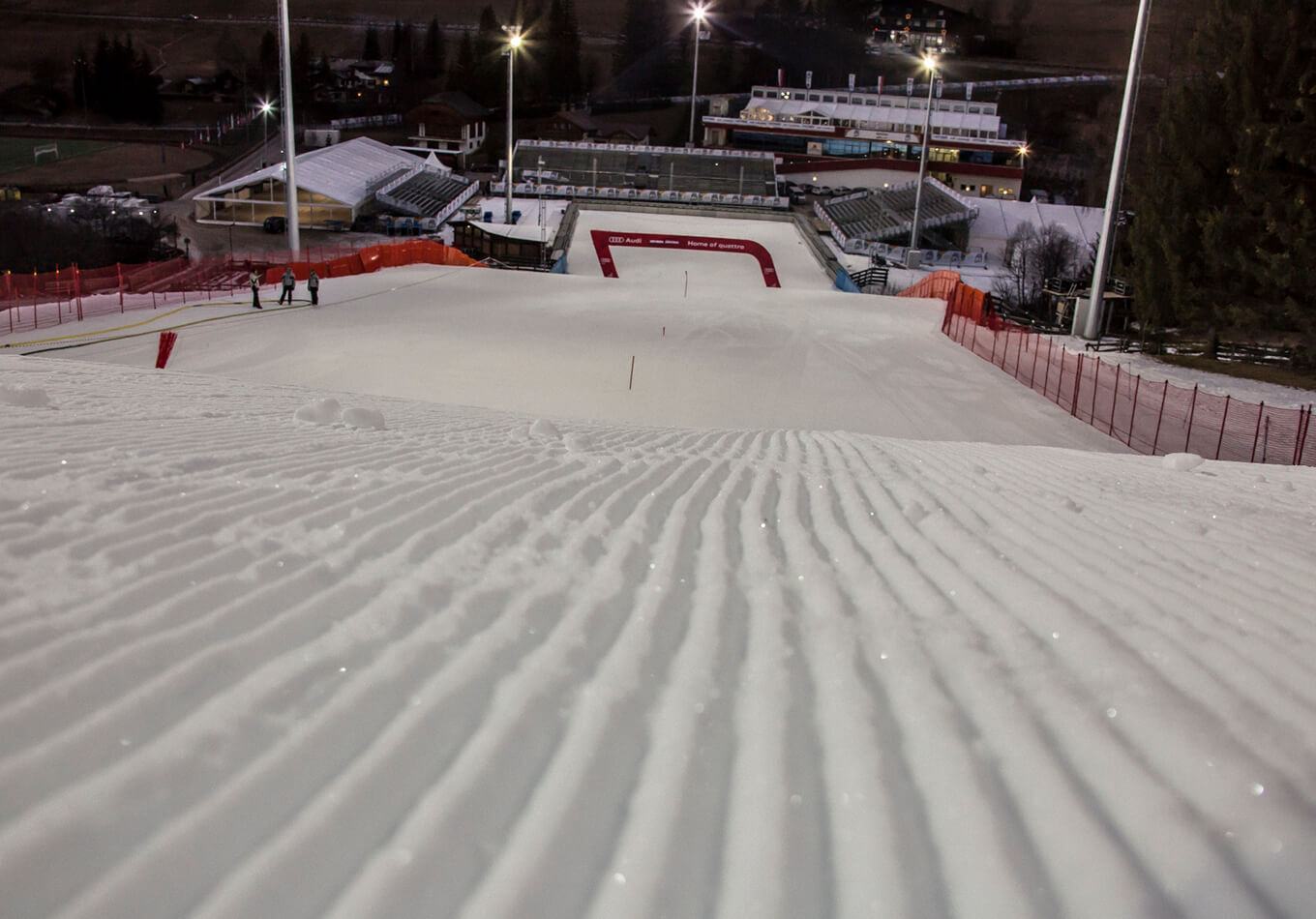 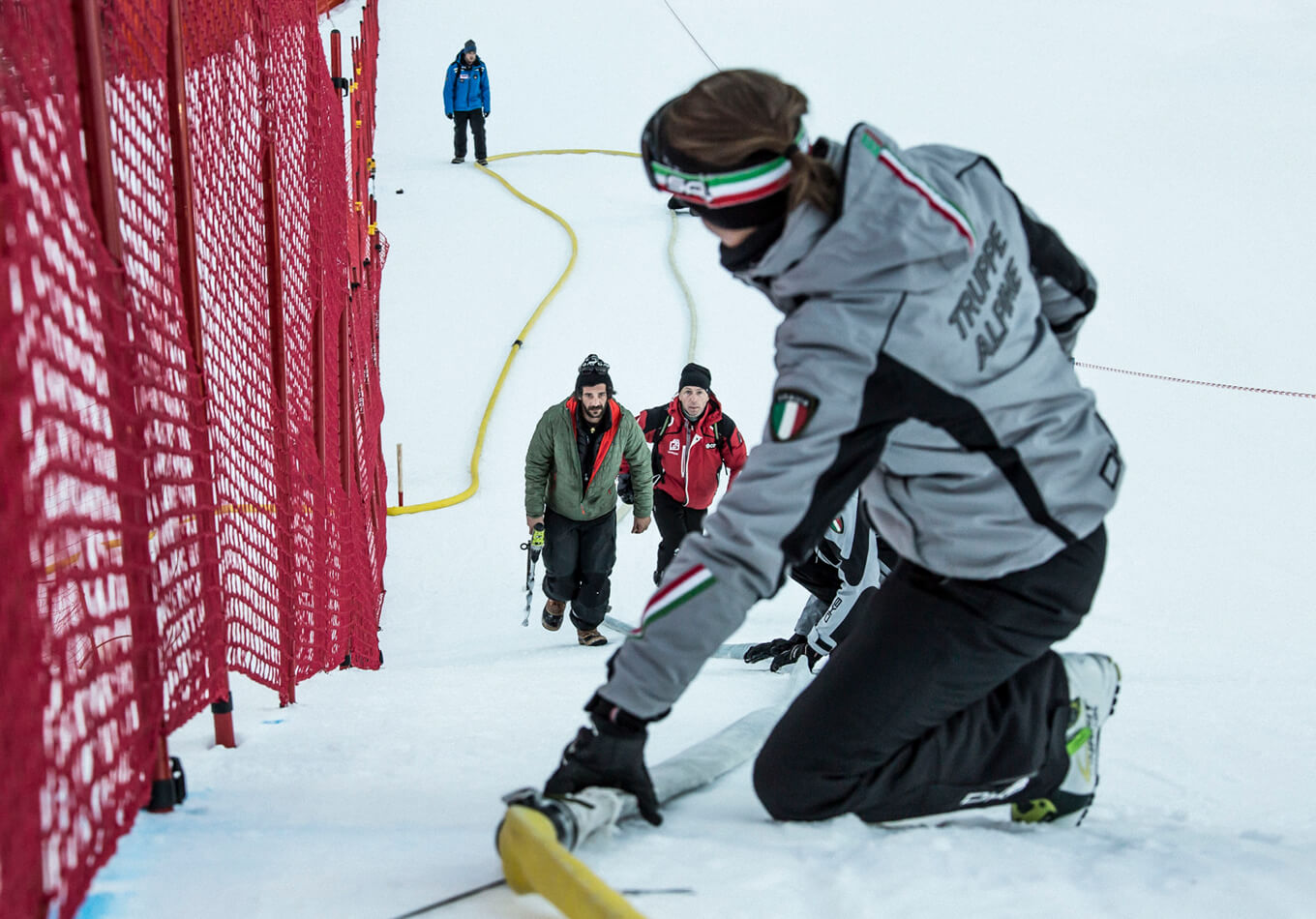 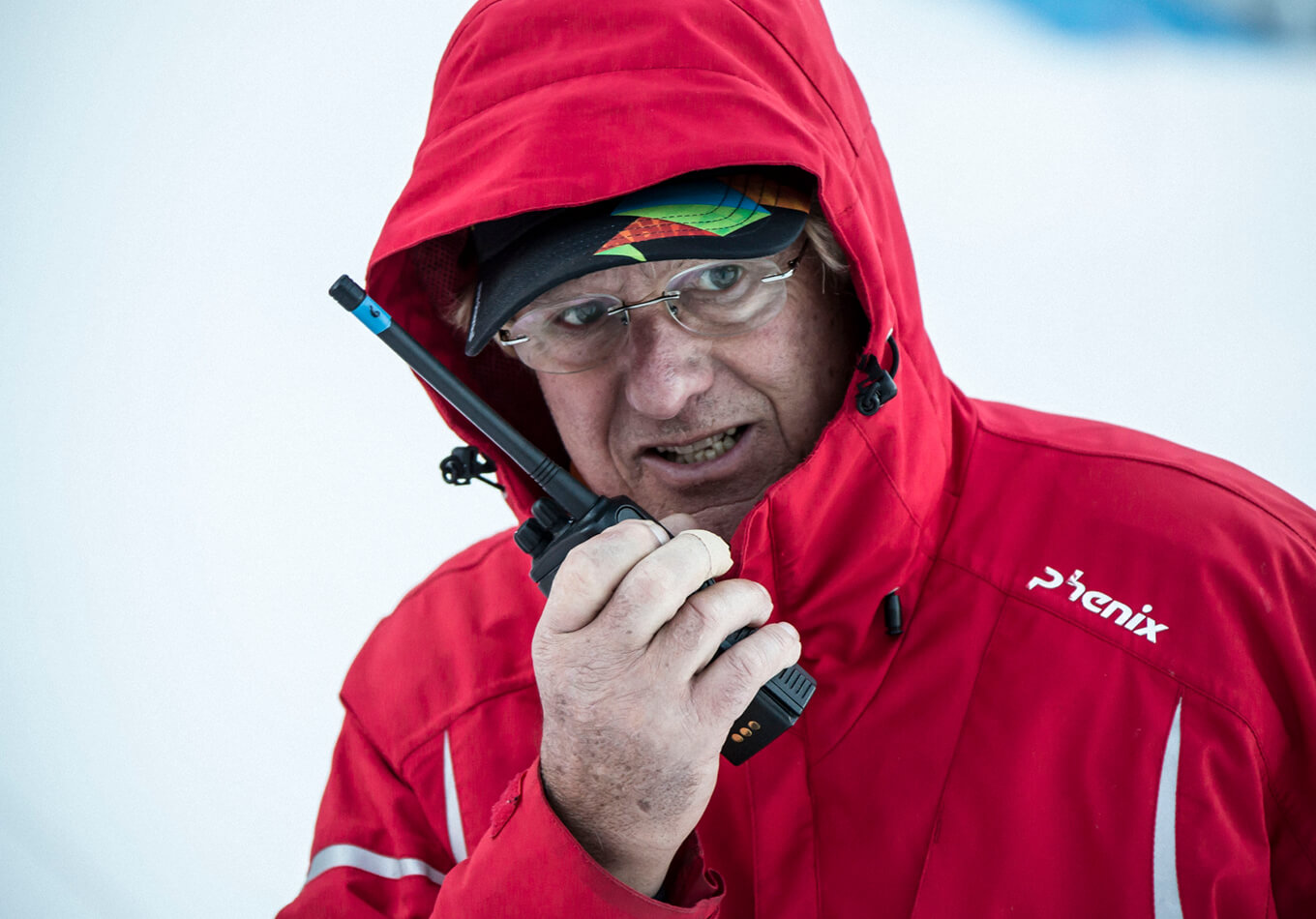 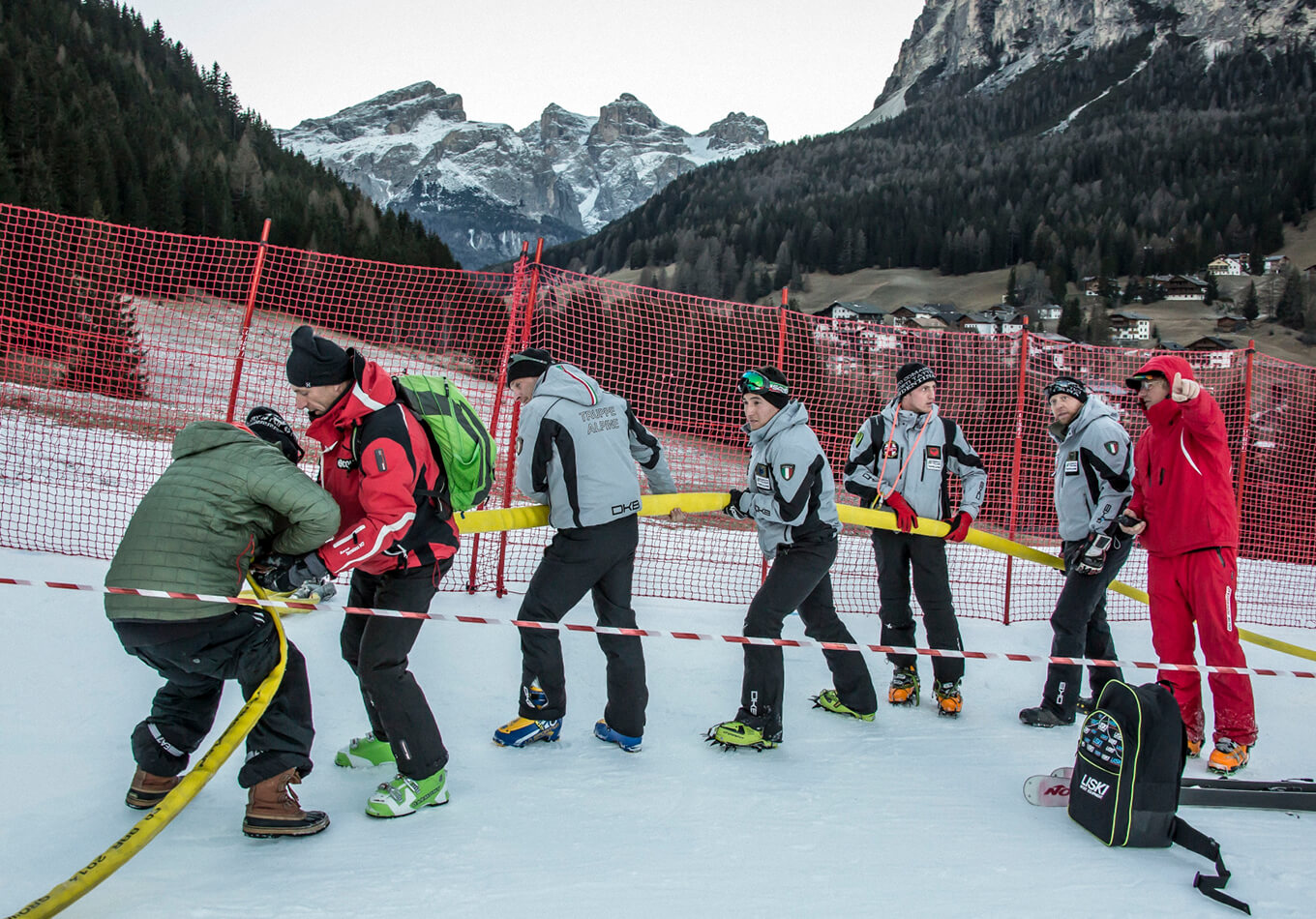 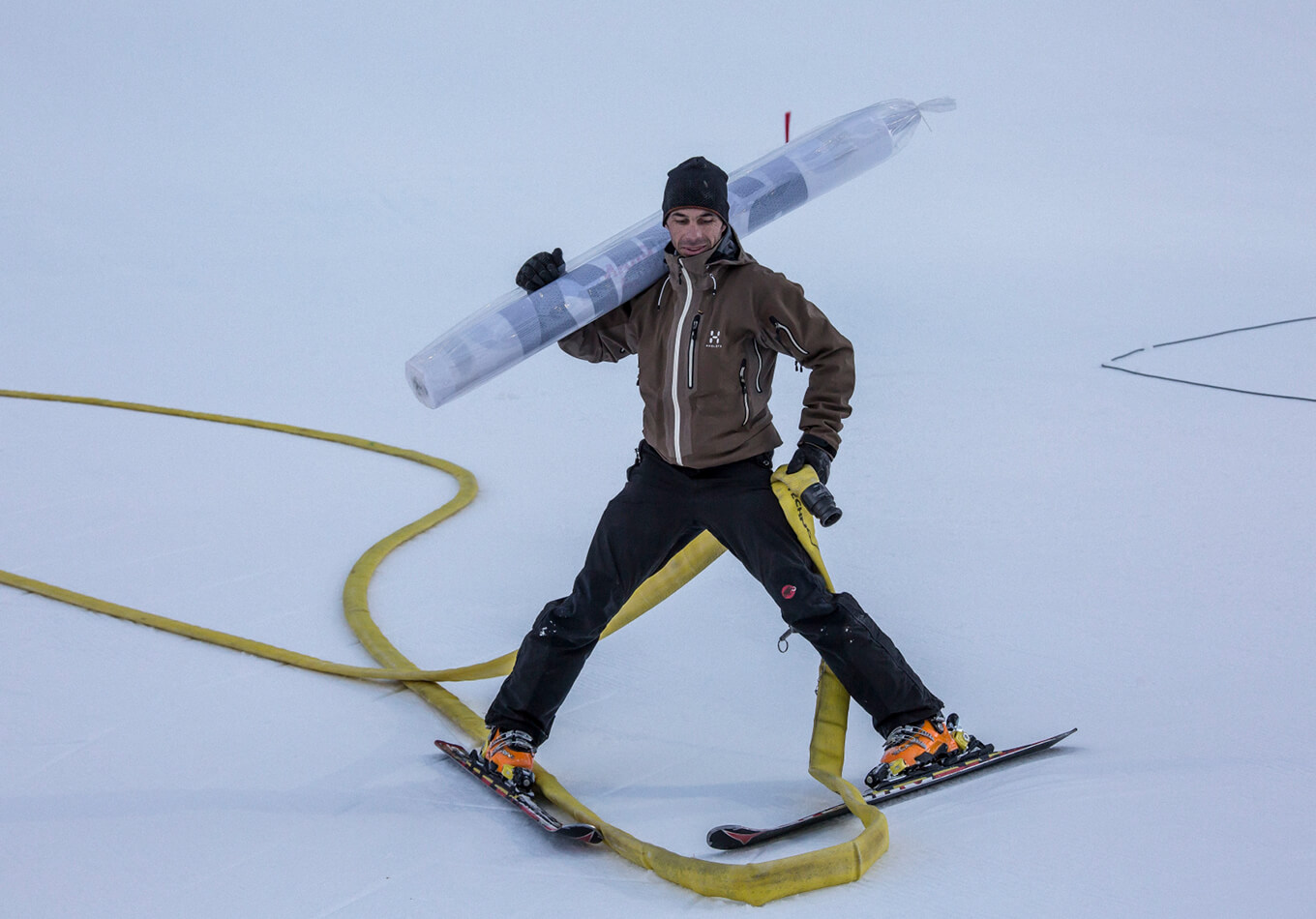 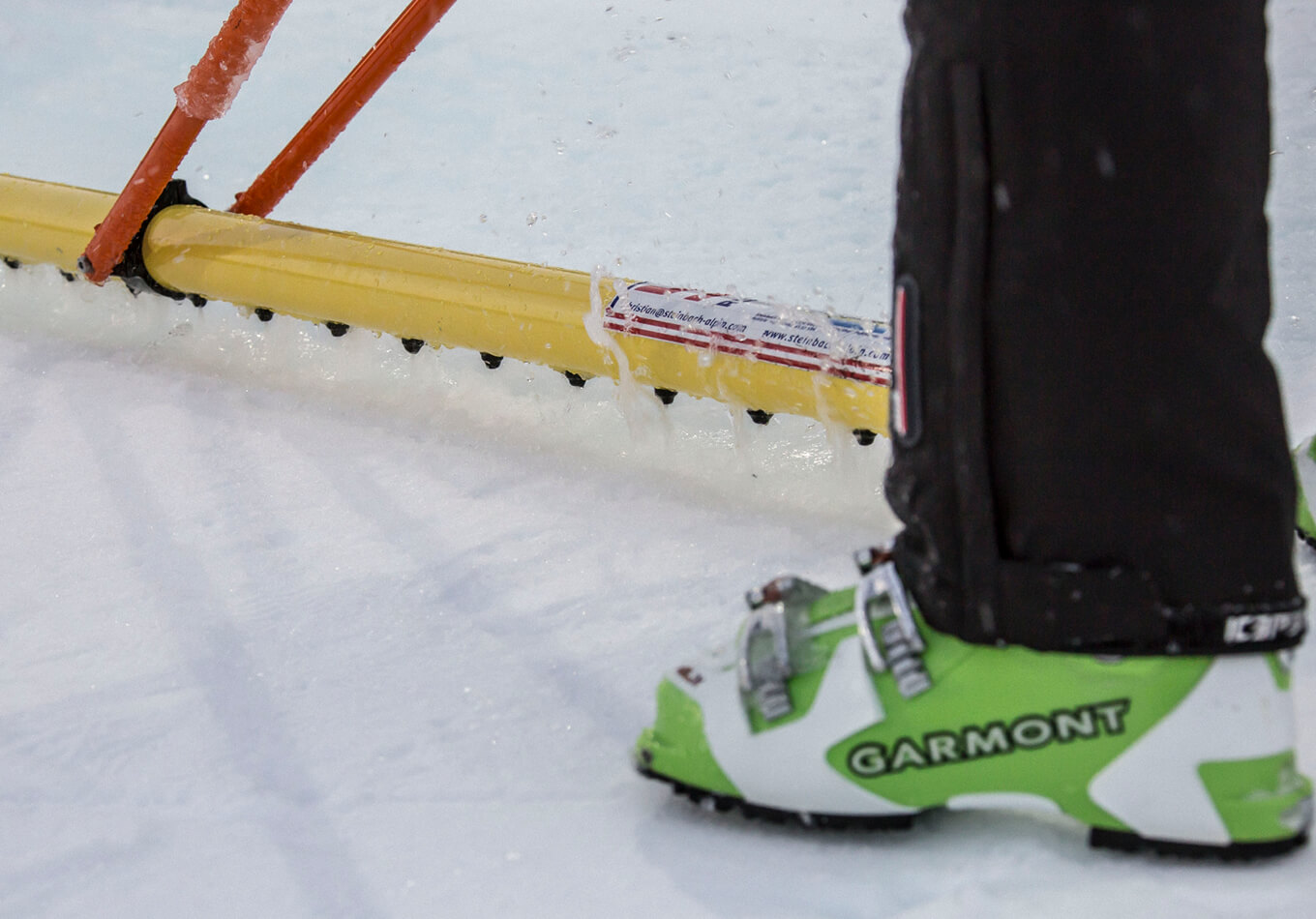 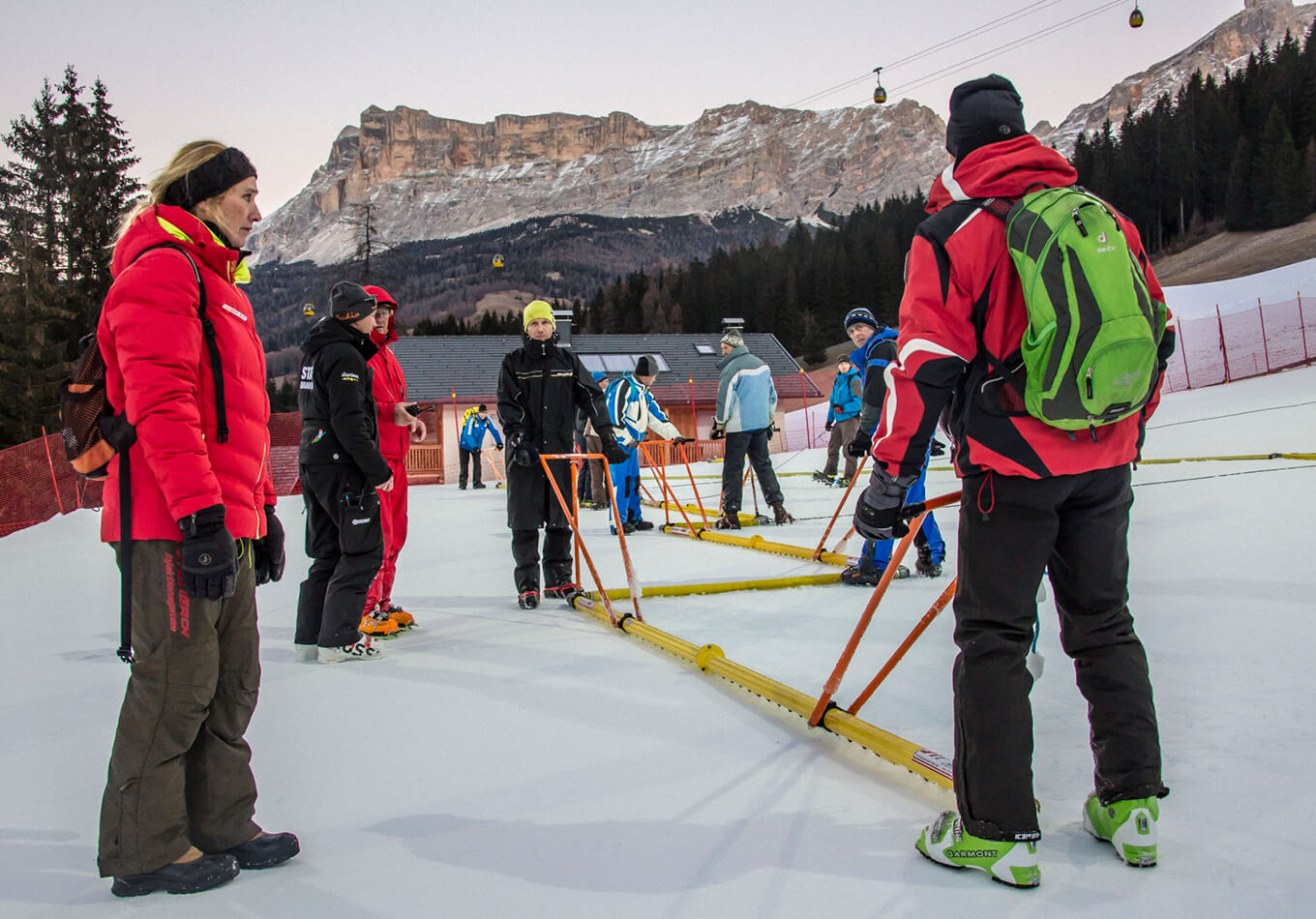 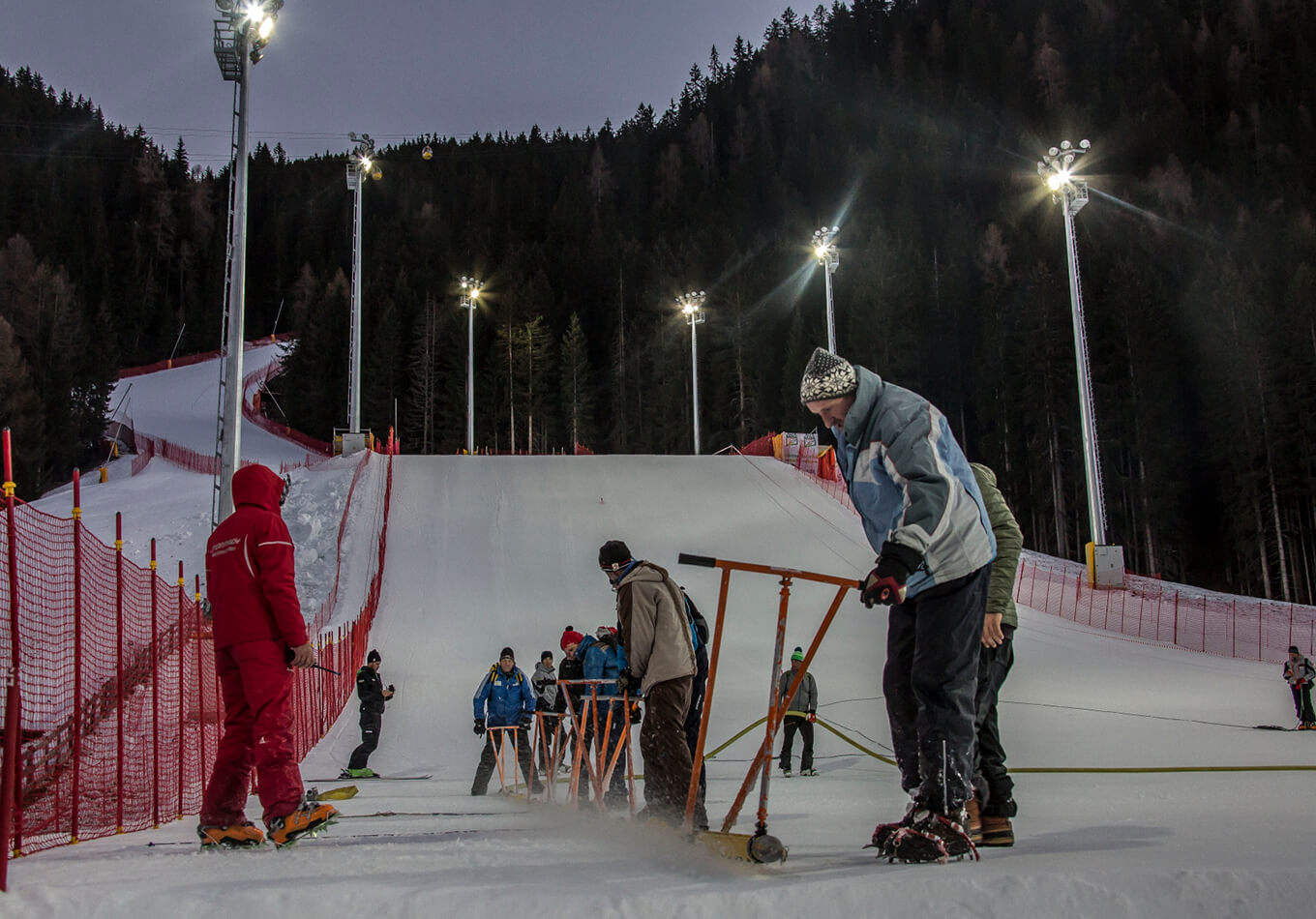 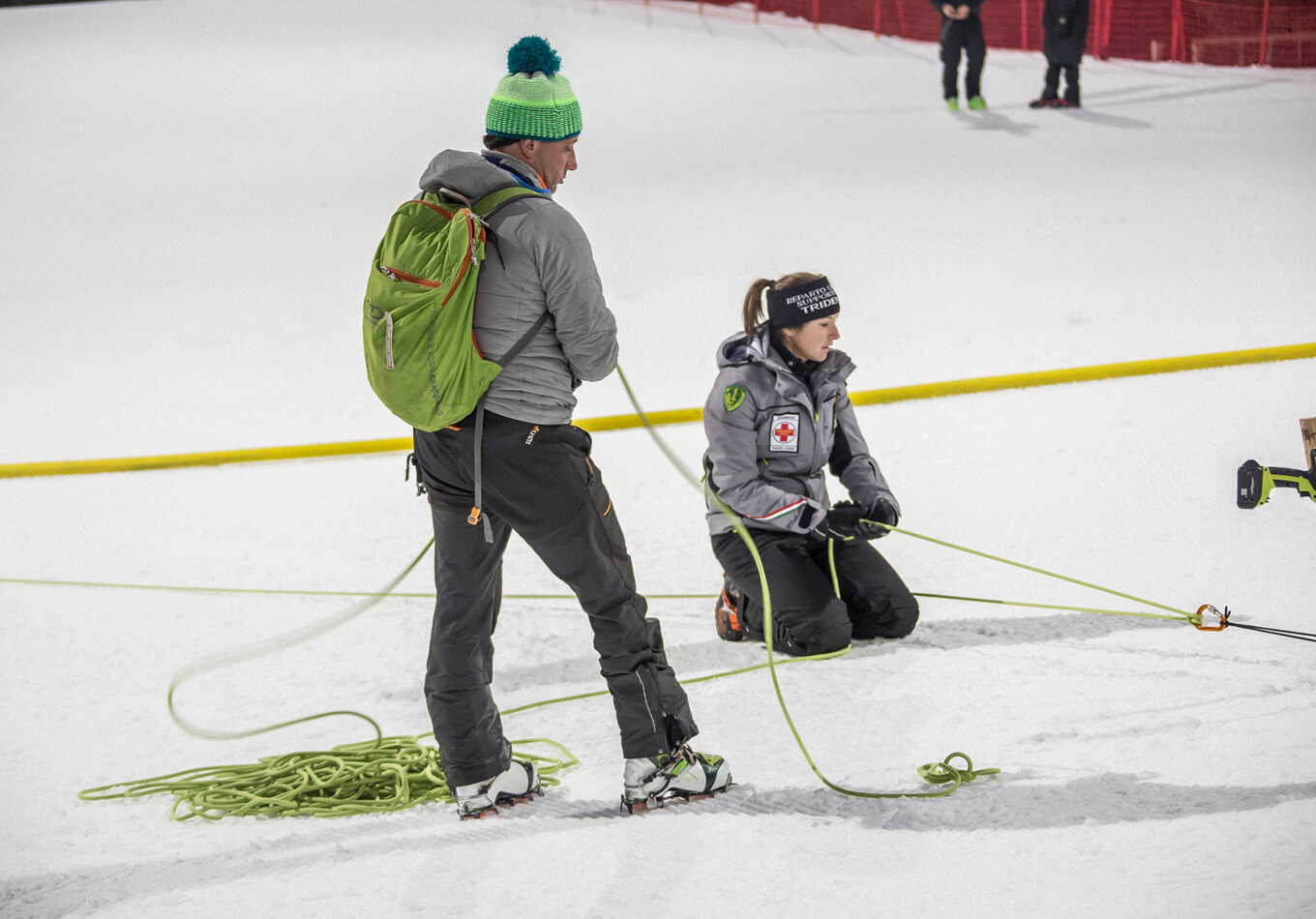 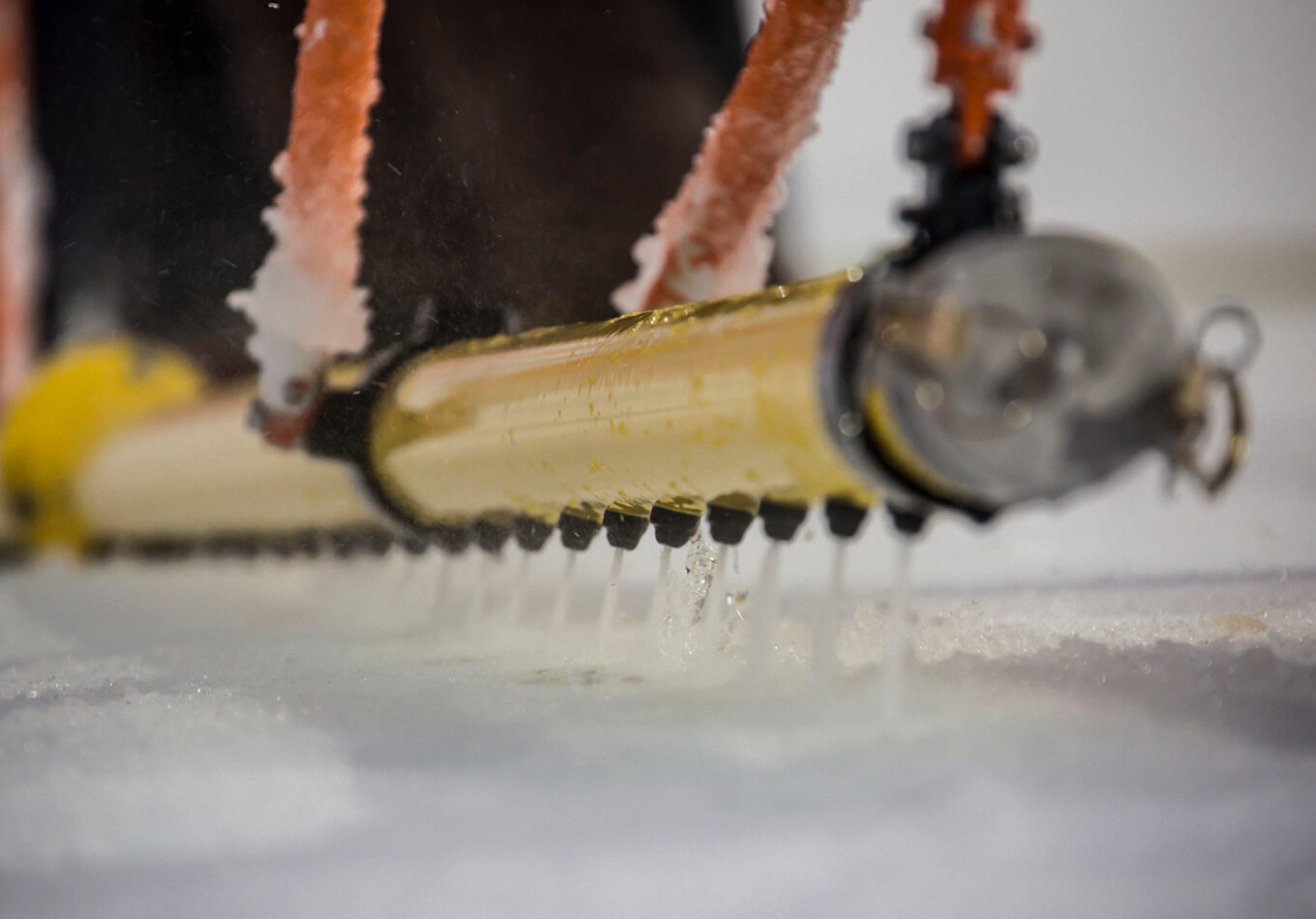 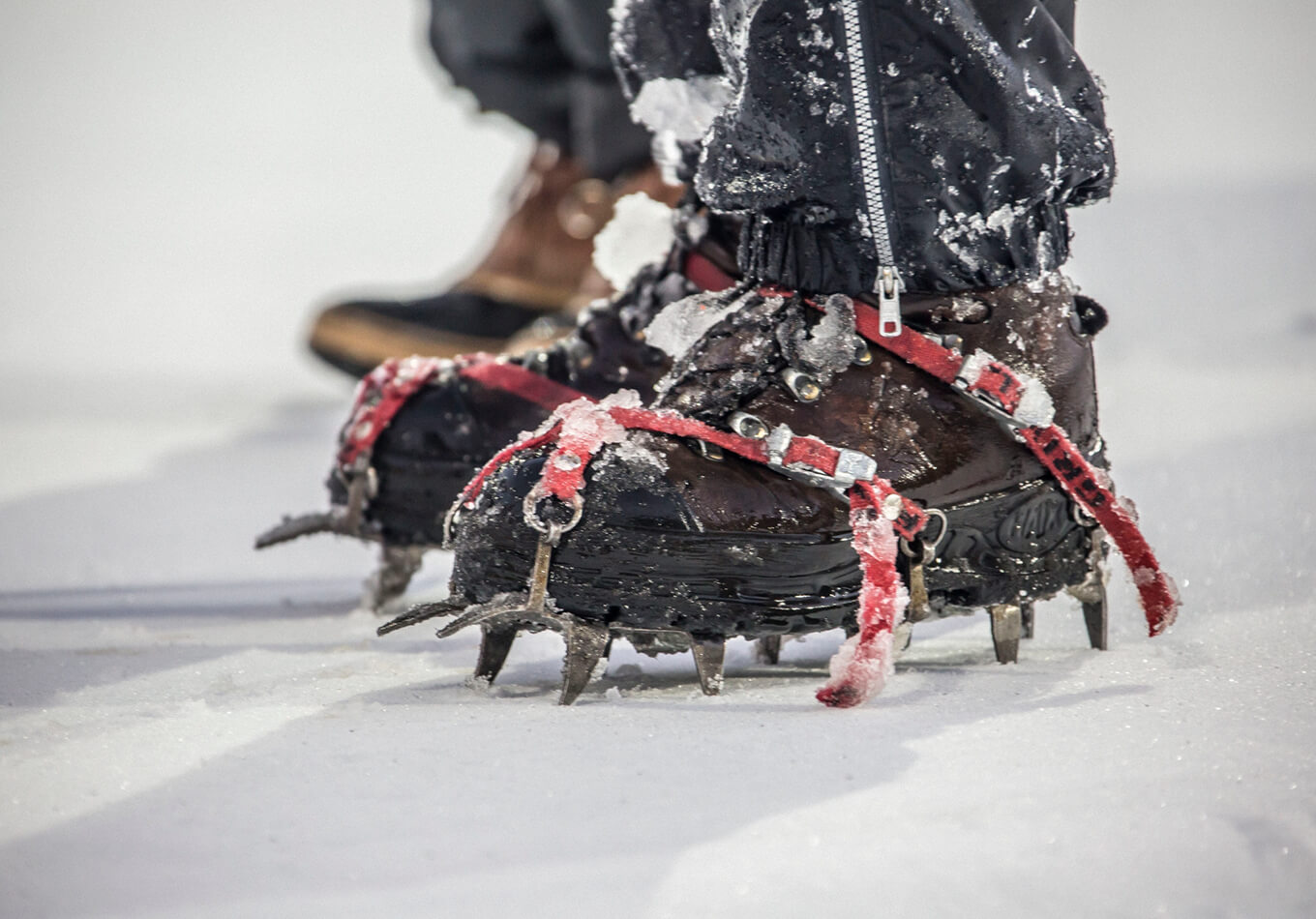 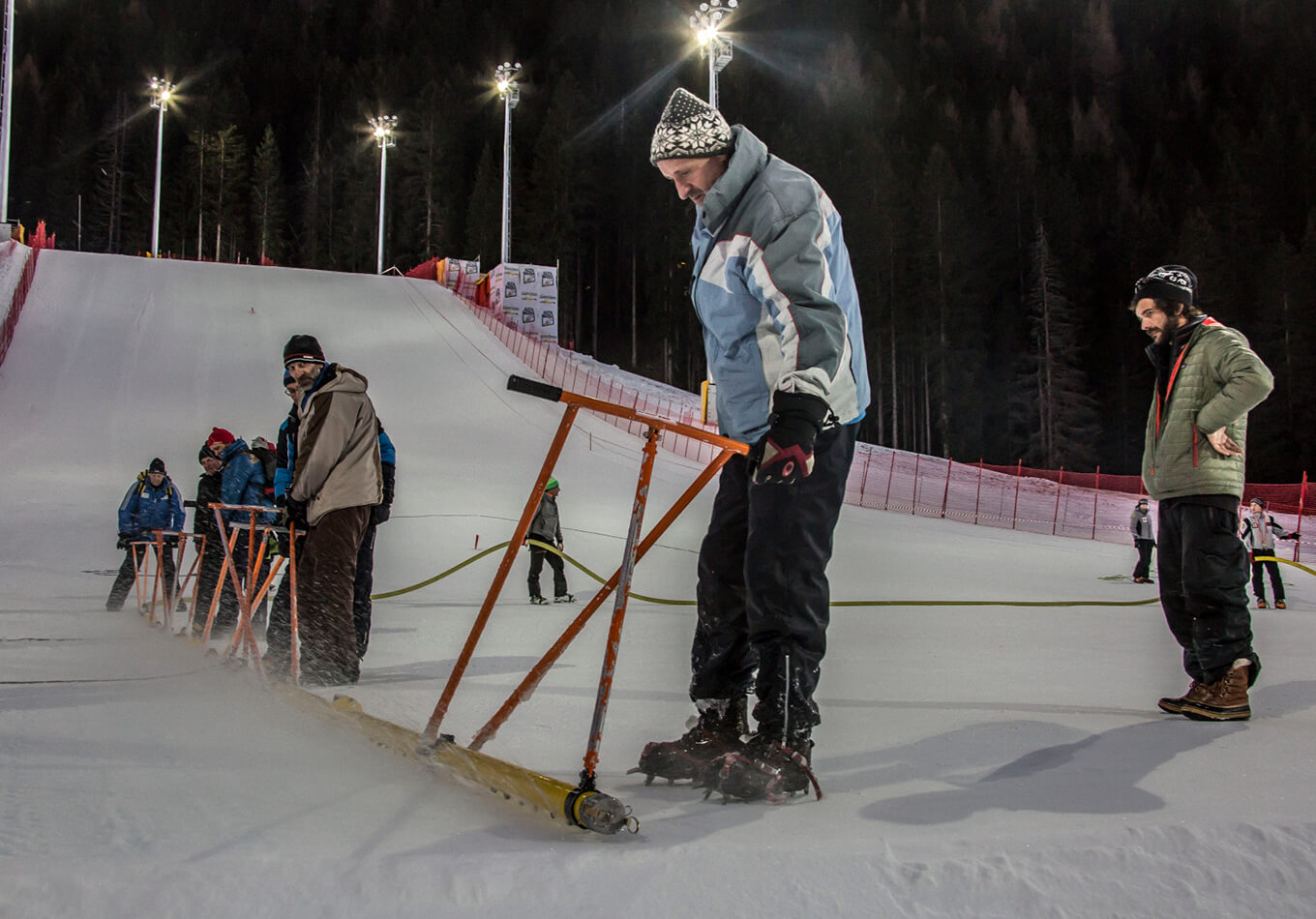 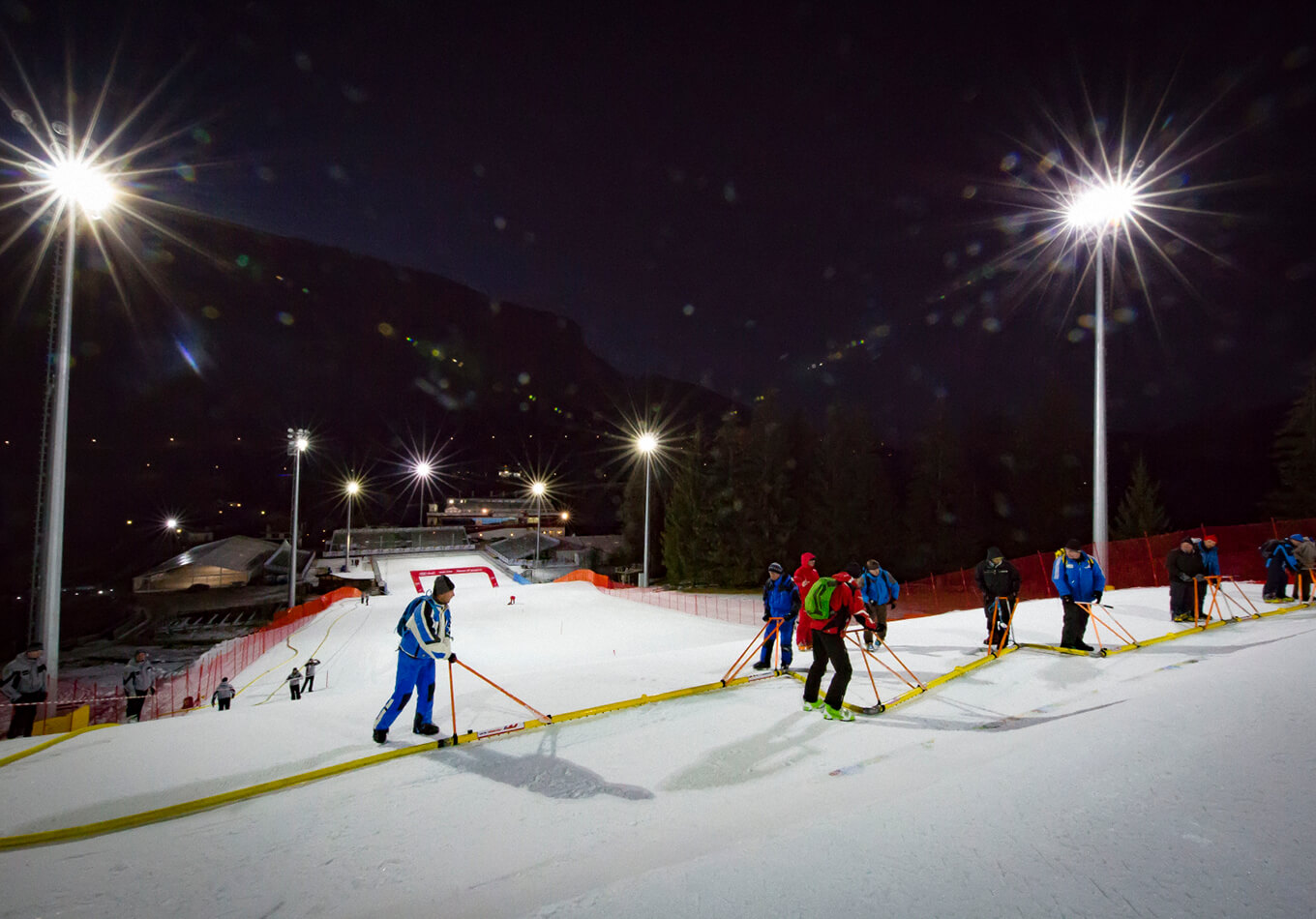 During this process a two-inch steel pipe, which is about 5 m long, with connected nozzles is put on the snow. The nozzles inject water with sufficient pressure to reach the depth of the snow cover. Snow normally has a temperature ranging from - 6 to - 10 ° C, so the warmer water evaporates from the bottom and rises up wider in the shape of a cone, thus wetting the whole snow.
The nozzles are located about 10 cm apart from each other and the pipe, positioned diagonally to the track, is moved vertically by hand and held still for a few seconds to allow proper water penetration. In this way, it is possible to do about one injection every square decimetre on the track.

In order to reach the right specific weight on the Gran Risa, about 4,000,000 holes have to be made and an amount of about 700,000 litres of water has to be injected! To reduce working times, more tubes are interconnected to cover all the width of the race track.